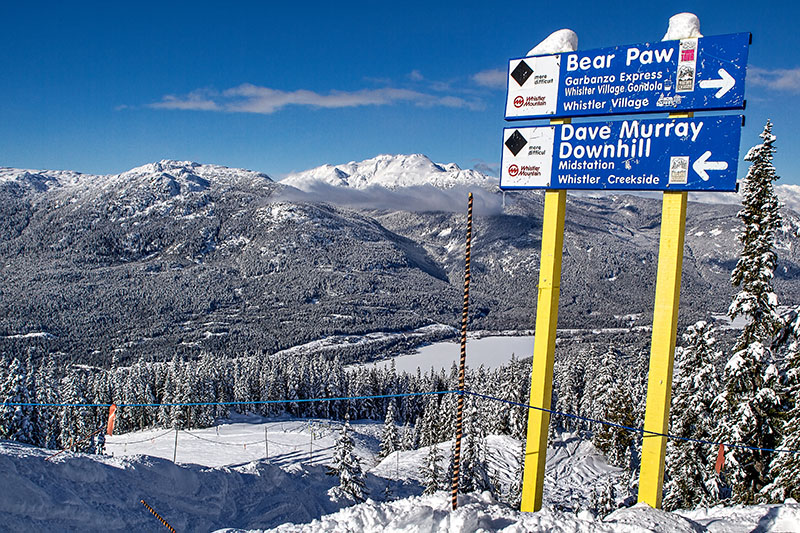 Why’s It Called That? 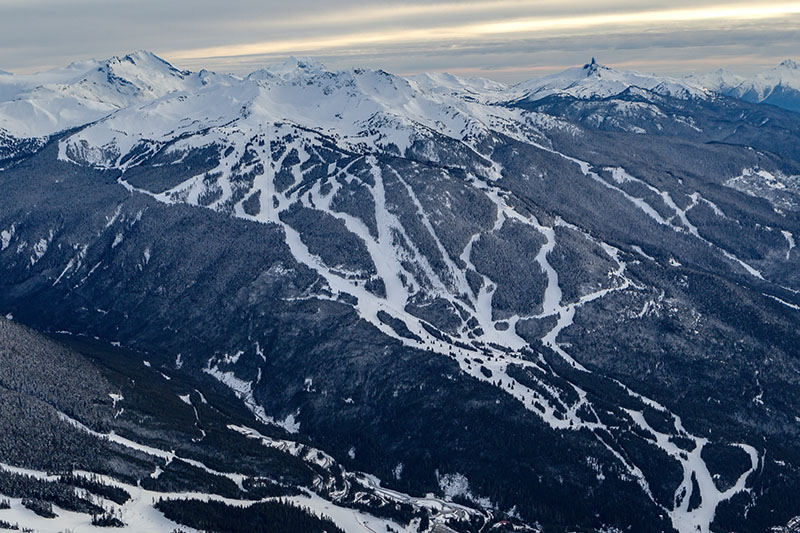 Burnt Stew. Pig Alley. VD Chutes. Spanky’s Ladder. The list of odd and intriguing trail names on Whistler and Blackcomb mountains goes on and on.
Some of the names are unusual and hilarious. Others have historical significance. And some are fitting tributes to patrollers and early skiers — some of whom have passed away, but many still ski their namesakes regularly.

It’s well-known that Whistler Mountain used to be called London Mountain, named by British Naval surveyors in the 1860s. But the hoary marmots who lived in the alpine had such a shrill and distinctive whistle that it wasn’t long before the nickname Whistler stuck. And looking up at Blackcomb Mountain, it’s easy to see the resemblance of the serrated edge of the rocks at the summit to a rooster’s comb.

But what really makes people wonder are names like Cougar’s Milk, Pony Trail, Bushrat and Ladies First.
“Visitors and locals want to know why the runs they ski got the names they did,” said Allyn Pringle, events and community manager of the Whistler Museum. “There are so many stories behind the names.” She explained that some stories are quite funny, some are sad, and some are too inappropriate to be made public.

Pony Trail: When the ski hill was being developed in 1965, workers hauled materials and supplies up the mountains by packhorse. The pony trail was the route cut for the horses to use. This wide, gentle slope became Whistler’s first green run.

Jimmy’s Joker: Jimmy was a logger who cleared trees on Whistler Mountain to create ski runs. Bad weather and a confused sense of direction caused Jimmy to become disoriented, but it didn’t stop him from felling trees. He was supposed to be cutting an area for what is now Franz’s Run, but before he realized he was lost, he’d felled enough trees to create an entirely new run. Fellow loggers didn’t let him forget the mistake, and the new run was called “Jimmy’s Joker.”

Pig Alley: This trail was meant to serve as a shortcut from Whiskey Jack to Ego Bowl. “The Pig” was the nickname of the ski patrol’s first snowmobile, a hulk of a machine that would always get stuck.

Burnt Stew: Almost a decade before Whistler Mountain became a ski hill, Florence Petersen, Kelly Fairhurst and Don Gow were backpacking in the area. One evening, they set up camp and began cooking dinner in an old billycan over a fire built into the rocks. Unfortunately, the meal went untended, and the stew became a burnt and smelly mess. 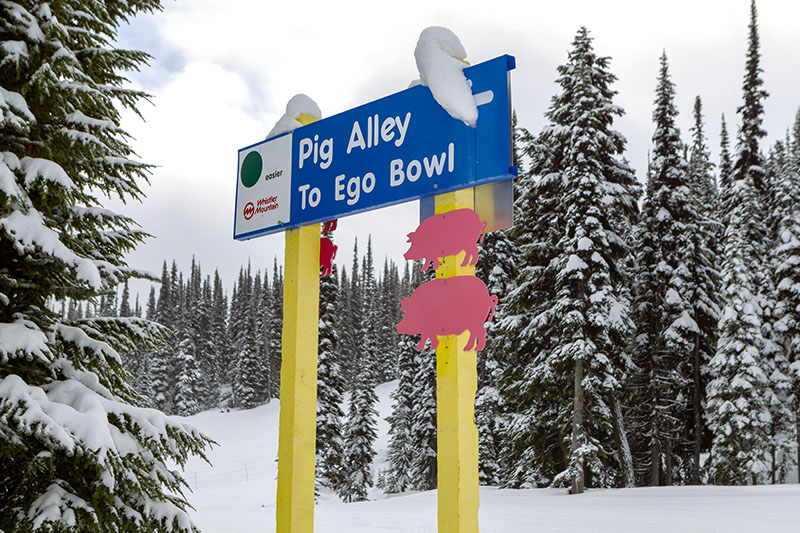 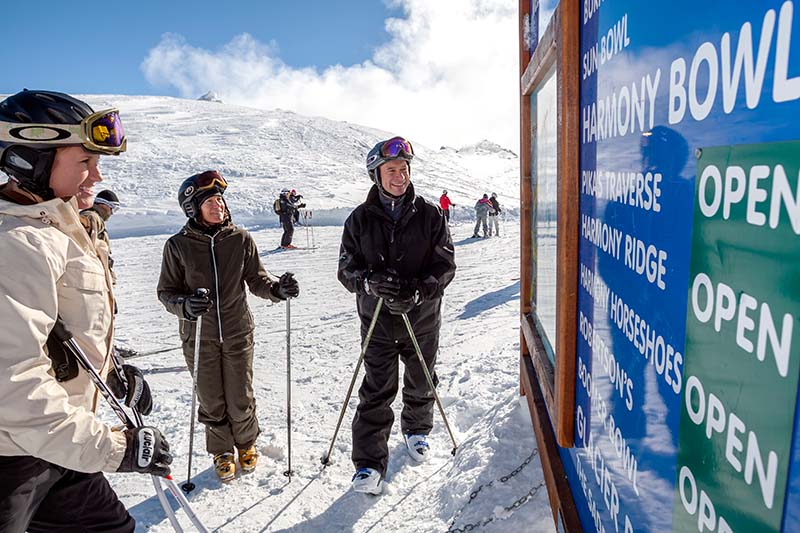 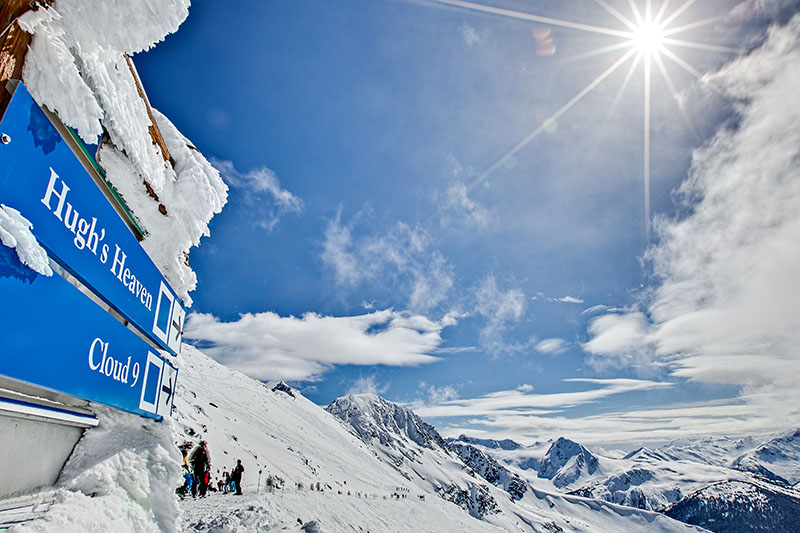 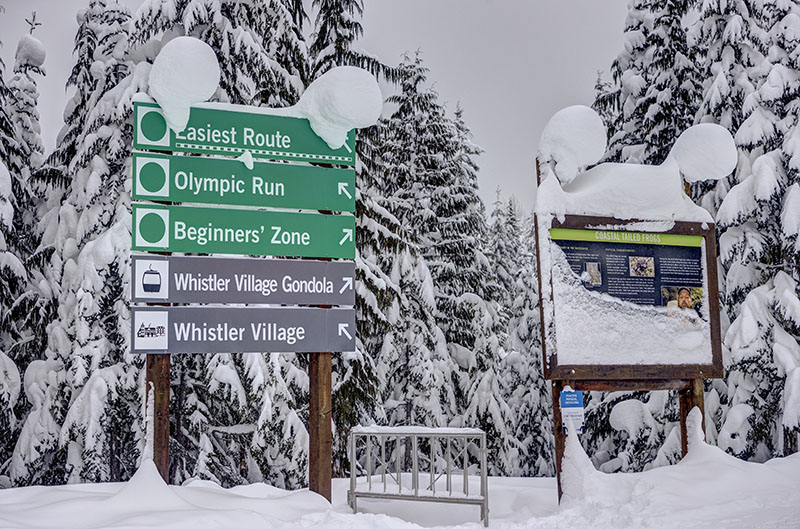 Ladies First: One day in the early 1980s, ski patroller Cathy Jewett and a group of fellow powder-hounds hiked up Chainsaw Ridge to access the Blackcomb Glacier. “It was called the Stupid Traverse,” said Jewett. One of the men said, “Ladies first,” so Jewett went, causing a small avalanche to crack under her ski tips. “I went ass over teakettle,” she said. Jewett, who currently serves as a Whistler councillor, still gets a kick out of the sign but says, “It’s a bit ignoble. I wish it were because I shredded it.”

Ross’ Gold: Snowboarder Ross Rebagliati was the first Olympic gold medalist snowboarder in history, as 1998 was the sport’s Olympic debut in Nagano, Japan.

Bushrat: This is a technical chute off Chainsaw Ridge, named after John Hetherington, a local legend and heli-ski guide who had previously worked on the Whistler Mountain Ski Patrol.

7th Heaven: The 7th Heaven T-bar was the 7th lift built on Blackcomb. The name also reflects the spectacular ski experience of that highest region of the mountain.
Many of Blackcomb’s runs were inspired by the logging industry.

Jersey Cream: Valuable timber; cream of the crop. Its original name was Hooker, referring to a foreman of a logging “side.” However, the name was changed to one considered more “suitable.”

Cruiser: A logger who surveys standing timber for volume.

Catskinner: Someone who drives a machine with Caterpillar treads.

Cougar Milk: A term referring to the grease used on logging equipment.

Undercut: A notch cut into a tree trunk to ensure it falls in a certain direction.

Gear Jammer: A nickname for a heavy equipment operator.

The Whistler Museum encourages visitors and locals to pop in and learn more about their favourite runs and the history behind the ski resort. whistlermuseum.org