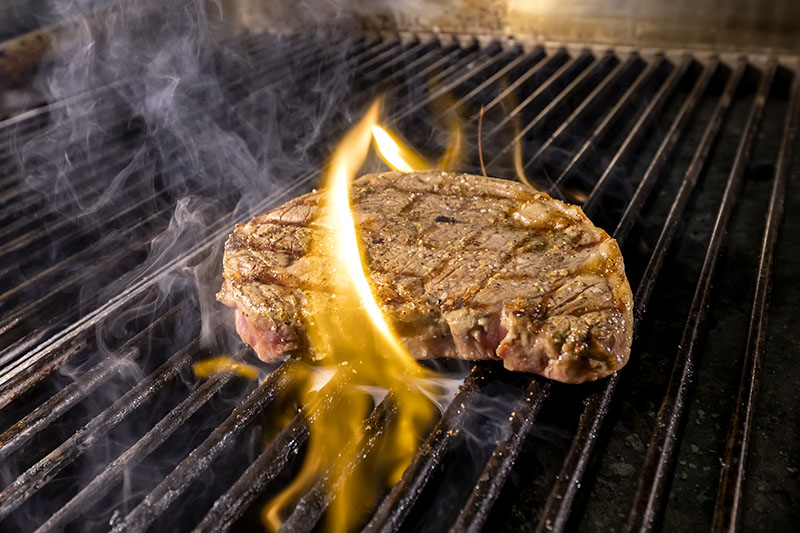 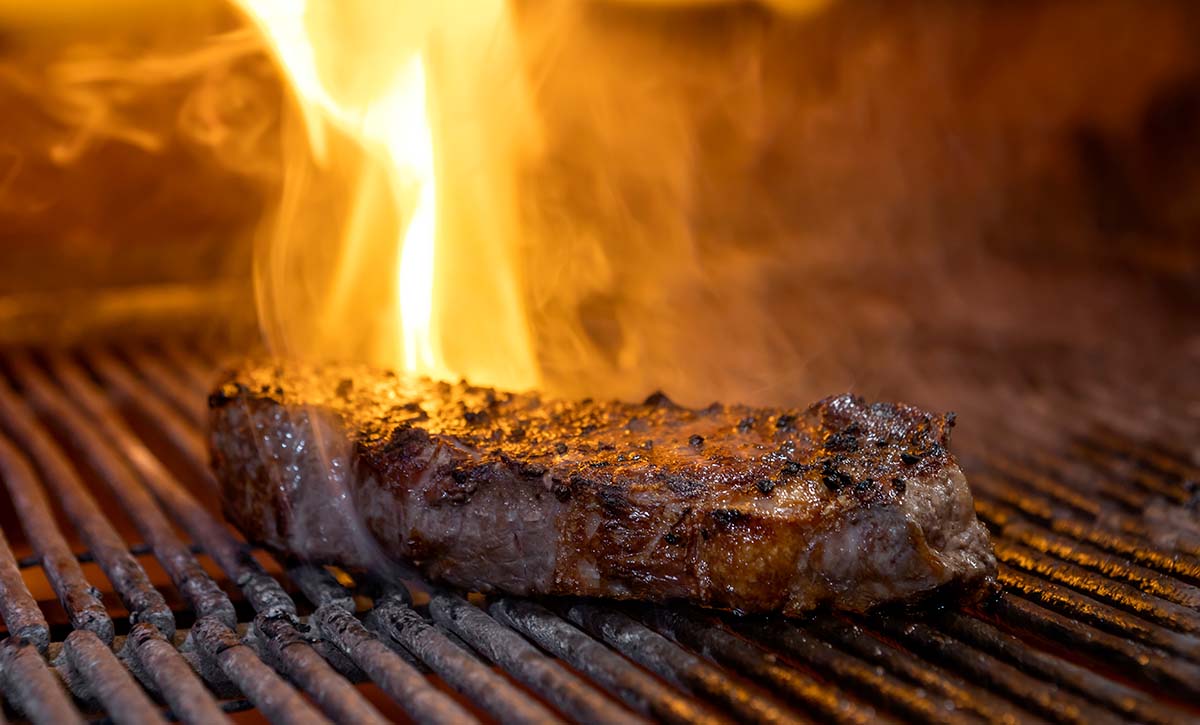 No matter the season, the lure of fire-cooked food is always tempting. Maybe there’s something deep in our DNA — a siren song to our inner cave man or woman — that makes us drool when fire-grilled foods are on the menu. So, whether it’s meat, fish or even veggies on the grill, indulge that desire with a selection of flame-kissed favourites from these Whistler chefs.

Sidecut Executive Chef Sajish Kumar is glowing with excitement as he talks grilling: “The flames, the char that [it] brings, I feel that’s the very best element that we have as chefs, and it’s just such a different flavour than with cooking any other way!” he beams. Clearly in his element at the Four Seasons steakhouse Sidecut, Kumar prepares one of the restaurant’s most popular steaks for our pleasure: their 12oz Alberta ribeye, served with caramelized onions, kale, forest mushrooms, brussels sprouts, and chipotle bacon jam.

Portioned in-house, Kumar explains that the team gets to cut the steaks fresh to guests’ requirements from the huge 13-pound cuts that arrive from the famous Angus herd in High River, Alta. “These steaks have beautiful marbling, which makes for a gloriously buttery steak with the best char; the flames give the meat such an amazing aroma.” It’s true; there’s something special about the smoky scent and flavours that you only get from flame-cooked foods. Kumar agrees, laughing that it’s been an excellent method since time immemorial. “When you cook on a grill, the flavour of the flames comes through. That’s why I absolutely love it.” 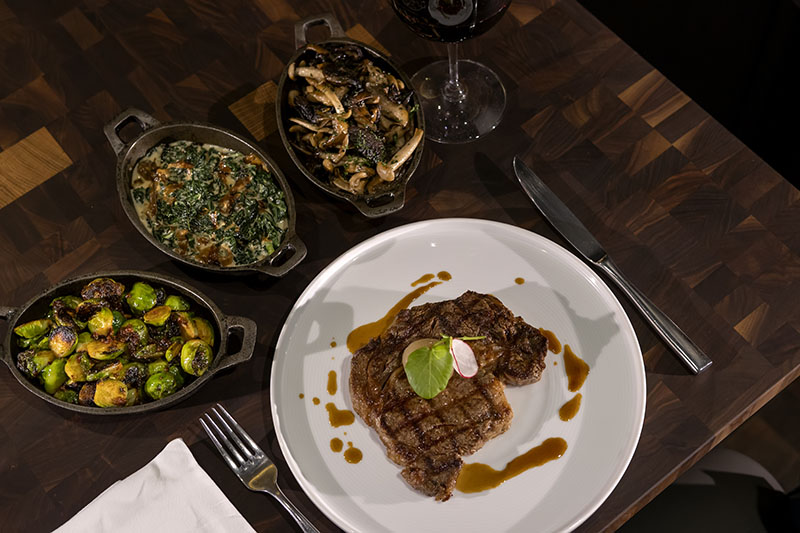 Kumar takes the expectations of the guests seriously when it comes to creating steaks with sizzle. “Guests come to a steakhouse for a flame-grilled steak because they know it locks those flavours in from the grill to the plate. We have such a great team here, and I love to cook at the grill with them. In the evening, the show begins, and it’s an amazing time working on the flames, with my team, together.” My recommendation? Settle back, let the show begin, and enjoy the delicious dishes this teamwork creates! 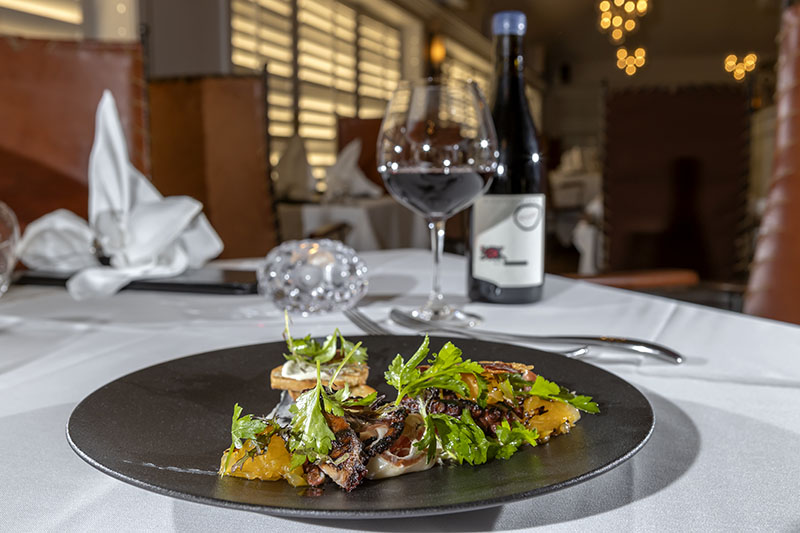 “I think grills are [more] for summer,” Melissa Craig, Bearfoot Bistro executive chef, says with a laugh. “Maybe that’s what winter grilling is all about? Reminding you of the sweetness of summer. If you don’t have a grill, you can always recreate that amazing flavour with a cast iron pan: you just need to get it hot, over high heat, and make sure there’s a little added sugar to get the best caramelization.” This Spanish-influenced dish certainly brings a flavour of warmer times, but the grilled orange segments root it firmly in our snowy season. “I was thinking of winter when citrus is at its best and pairing those bright flavours with Pacific octopus. Grills bring so much sweetness. I love how they caramelize and intensify flavours.”

Craig poaches her West Coast octopus in a court bouillon — an aromatic broth — until it’s tender. When it’s cooled, she tosses it in olive oil and black garlic molasses. “This is a new product for me. It’s something fun; the molasses is infused with black garlic, and it adds such an intensity of char and flavour, as it caramelizes so well.” Along with the octopus, orange segments, bread, and Iberico ham are tossed in Craig’s scorching hot cast iron pan over the grill's flame.

Carefully plating the protein on a bed of Macedonian feta, whipped with a little of its brine, orange zest and lemon, Craig says, “Normally, if you put cheese with octopus, you’ll probably think of something mild like buffalo mozzarella, but I think this works because it’s savoury and salty, and just so super creamy.” Scattered with a bit of leek ash to bring that sense of char and an ashy flavour, this doesn’t just work; it’s a grilled winter seafood celebration on a plate!

“When you think about grilling, the first thing your mind goes to is meat, but we wanted to include everyone in that experience, so we thought, why don’t we use rapini?” Caramba Executive Chef John Shepherd is deftly at work over a high-flame grill, ensuring those delicate florets get just the right amount of char. “We have a regular propane grill here,” explains Shepherd. “But if you run it to the max, you can still get smokiness and flavour out of the flames. It does take you back to something primal, and it’s the basis of cooking when you get down to it: flame plus meat, but in this case, veggies!”

Plant-based eating is on the rise, and Shepherd has certainly seen an increase in demand at Caramba for menu items for vegans and vegetarians. “I’d say in the last four or five years, the demand for plant-based options has doubled. Lots of people are conscious about the environment and climate change, and part of that is moving to a more plant-based diet. That doesn’t mean compromising on flavour, though.” 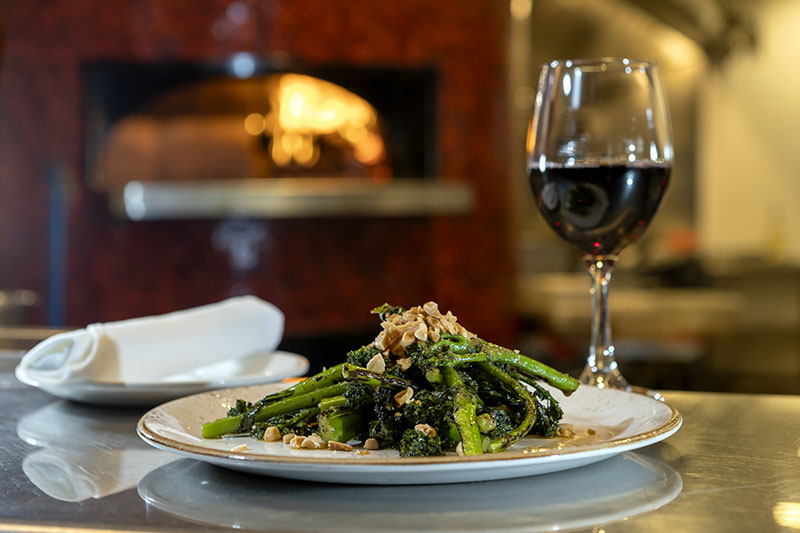 Shepherd’s char-grilled rapini comes tossed in a hot bagna càuda dressing studded with Macedonian almonds. “Bagna càuda is traditionally an Italian fondue-style dip made with anchovies, garlic, lemon and olive oil. For our process, to make it vegan, we use lemon, garlic and red miso instead of anchovy to bring that saltiness. We put it in a double boiler to cook for an hour to let the flavours develop, and then we purée it with olive oil, salt and pepper.” As for the rapini, if you’re unfamiliar, it’s an Italian veggie that looks a little like broccolini, explains Shepherd. “It’s completely edible, but unlike broccoli, the stem is tender, not woody, and the florets are very young and flavourful.” With the smokiness from the grill, the tasty char on the rapini, the savoury saltiness of the bagna càuda and the crunch of the almonds, this is a must-order dish for veggie and meat-eaters alike. 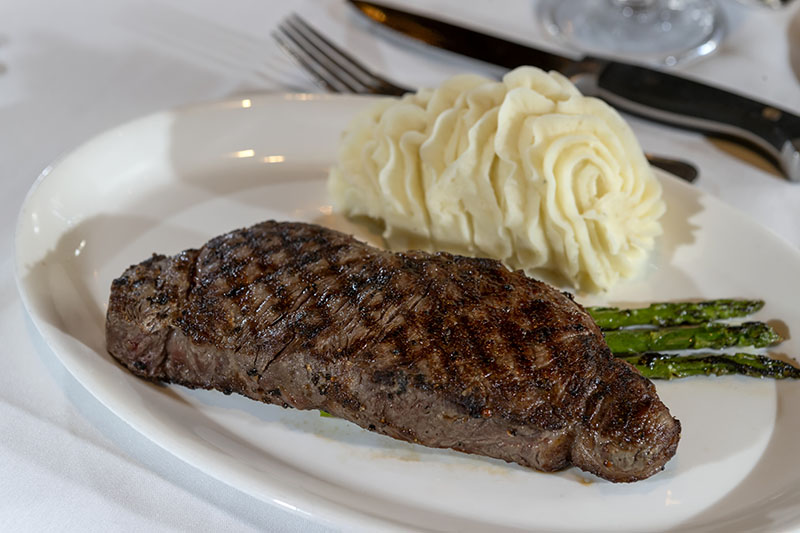 It’s always exciting to learn from an expert, and there’s nothing Hy’s general manager Michael Kyle doesn’t know about the magic that happens when flames meet the perfect steak. “A properly prepared steak is amazing,” he declares. “If it’s done to the right temperature, cooked right, rested right, and if you can taste a bit of flame in the char, it’s the best — and that’s what we strive for.”

A good steak starts with a high-heat sear to seal in the flavour. And, on the grill right now, being kissed by flames, is a 14oz New York Strip, which Kyle explains is the best of both worlds, thanks to a strip of fat that runs around the outside. “It’s a good hybrid between a smaller tenderloin and a bigger bone-in steak,” he explains. “It’s firmer in the middle and has a nice mix of marbling and flavour.” Once the steak is flipped, I admire the grill marks, which Kyle says is a sign that it’s cooked with care at the correct temperature.

The tempting smell and sizzle have me eager to dive in, but Kyle says a good steak is a rested steak. “When you rest the steak, that means that the juiciness and tenderness stay in the meat, so when you cut into it, it doesn’t gush all over the plate!” So, I swirl and sip a glass of red and savour the anticipation. “There’s no reason to doubt why this is such a locals’ favourite,” Kyle says with a smile. “We might not see some of our out-of-town guests regularly, but they always join us each time they’re in town because they know they’re in good hands here. That experience of seamless timing and wonderful service can’t be matched.” My steak arrives, accompanied by the butteriest, most decadent mashed potatoes, and char-grilled lemon asparagus. I take a bite and sigh with pleasure. Perfection is worth a little wait.

“For me, grilled foods — meats in particular — just taste better than pan-fried or roasted ones; I like the char, that chew you get from the crust from the grill, you get more of a depth of flavour,” says R.D. Stewart. “Of course, it’s just another kitchen tool, like sous vide, but that lick of flame can be so beneficial.” On the grill today is a rump roast cut of Australian lamb, also known as the sirloin. A relatively inexpensive “bistro” cut, it’s a flavourful piece of meat that’s cut from the hip, and in the hands of a master like Stewart, it’s transformed into an absolute plate-licker of a dish.

“I don’t have a wood-fired grill here, sadly, but sometimes we add wood chips to the grill to add in extra smokiness; but it’s fun to cook on any grill, really,” says Stewart, who confesses to a year-round grilling habit at home. “I barbecue all the time, even winter. I’m always out there!” In this dish, both protein and the sauce get that flame-grilled touch. “I used earthy spices for the lamb to add an extra level of smokiness,” explains Stewart. “Cumin, chipotle pepper powder, chili powder, rosemary and black pepper.” The lamb is marinated for almost two days, then fired on the grill to get a tasty charred crust, and finished in the oven. 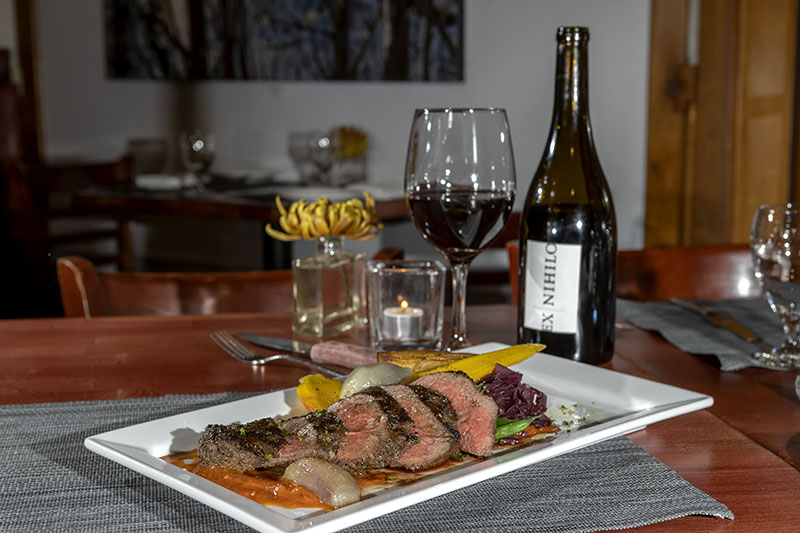 The charred romesco sauce is made with tomatoes, shallots, garlic, jalapeño, and rosemary. All are grilled, then blended with fresh oregano, basil, red wine vinegar and olive oil to make a silky purée with a smoky kick. This works wonderfully well with the spiced lamb and melt-in-the-mouth Yukon potato pavé, and is punctuated by super-sweet carrots from local Rootdown Farms.

Paired with a plummy Pinot Noir from Ex Nihilo in Lake Country, B.C., prepare to embrace the warm flavours of winter with this spiced grilled lamb and braised cabbage redolent with pumpkin spices and tart apples.