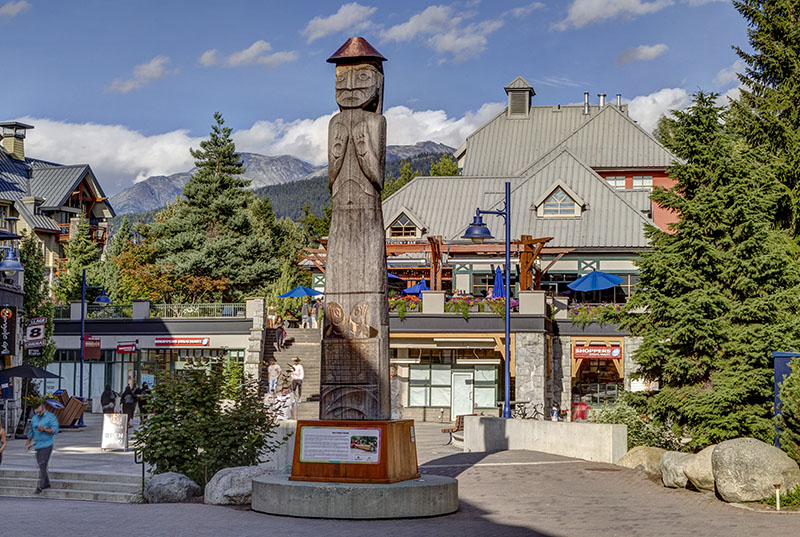 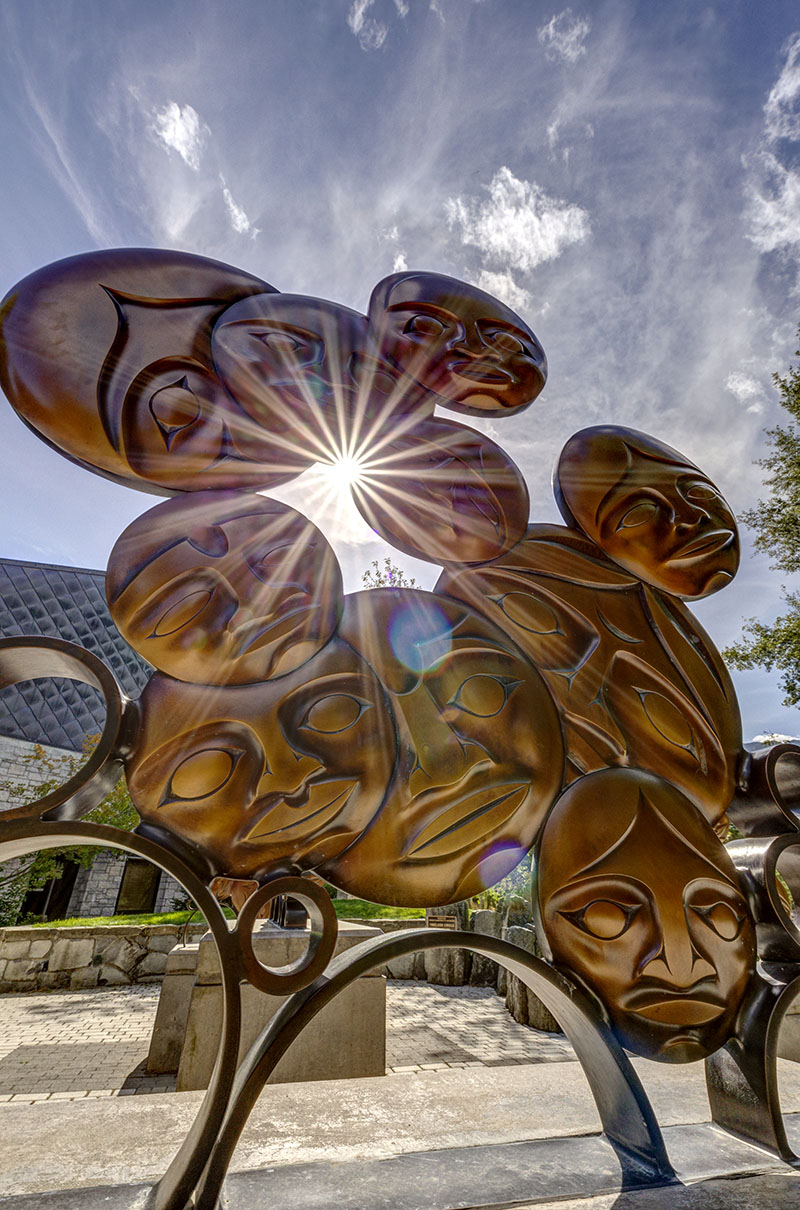 Whistler is known far and wide as a place for outdoor adventure, but there’s a side to the Whistler Valley that pre-dates its time as a top-ranked four-season resort — by millennia, in fact. Whistler offers a unique opportunity to explore many pieces of Indigenous art while also enjoying the outdoors visiting our neighbourhoods, parks and Olympic legacy venues.

The one-of-a-kind Squamish Lil’wat Cultural Centre (SLCC) is a terrific place to learn more about the unique cultures of the Squamish and Lil’wat people. They have inhabited what’s now known as the Sea to Sky Corridor since many centuries before the arrival of the first Europeans in the mid-1800s. The centre showcases the art, culture and traditional practices of the Squamish and Lil’wat, helping guests gain a deeper understanding of their cultures.

The “Welcome Figures” outside the SLCC are just the tip of the iceberg for outdoor, First Nations-themed artwork. This year, the centre has decided to showcase all the remarkable pieces available for viewing during a no-cost, self-guided tour around the resort. The pieces represent not just the styles of the Squamish and Lil’wat but other Coast Salish or Interior Salish peoples as well.

“These are a sample of art done by Indigenous People of mainly the West Coast of British Columbia,” said Mixalhtsa7 Alison Pascal, SLCC curator. “While many of these artists’ [works] are in our gift shop, all of the Squamish and Lil’wat artists are featured in our museum’s collection. “There’s a broad scope of Indigenous art on display throughout the Whistler Valley, and we hadn’t curated a self-guided tour before,” Mixalhtsa7 added. “Given the current situation with COVID-19, we thought it was high time to make something available for people looking to explore Indigenous art throughout the valley.” 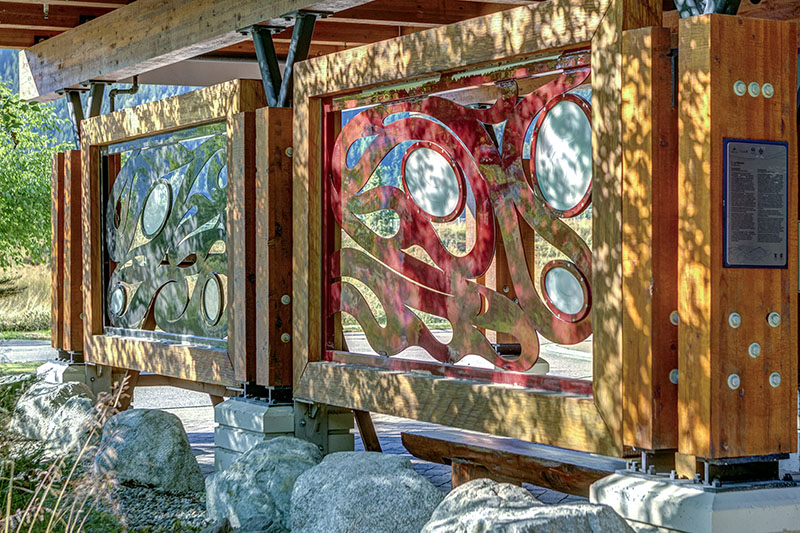 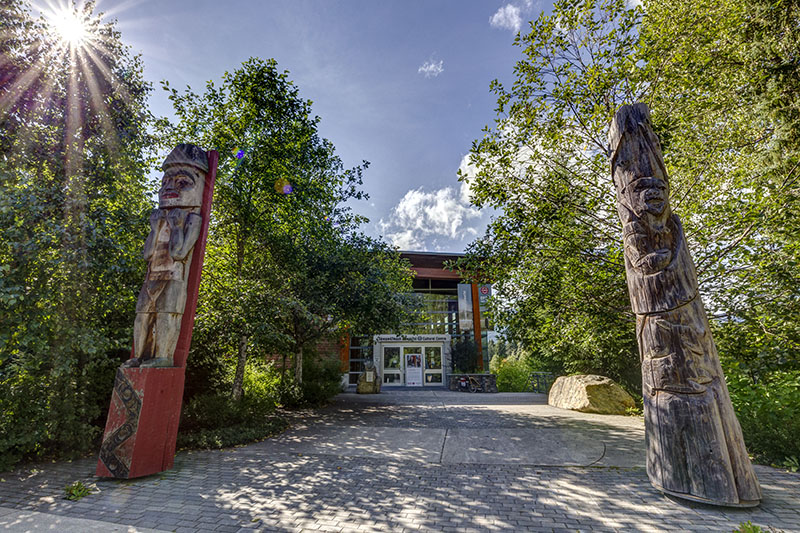 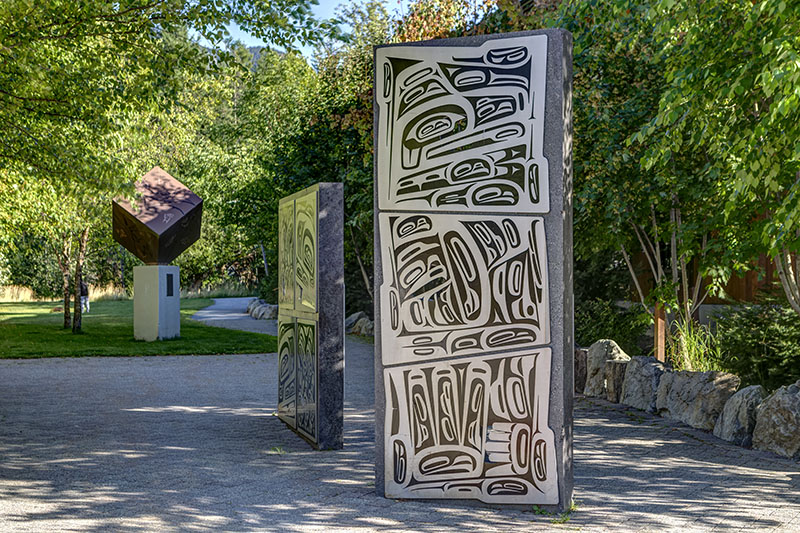 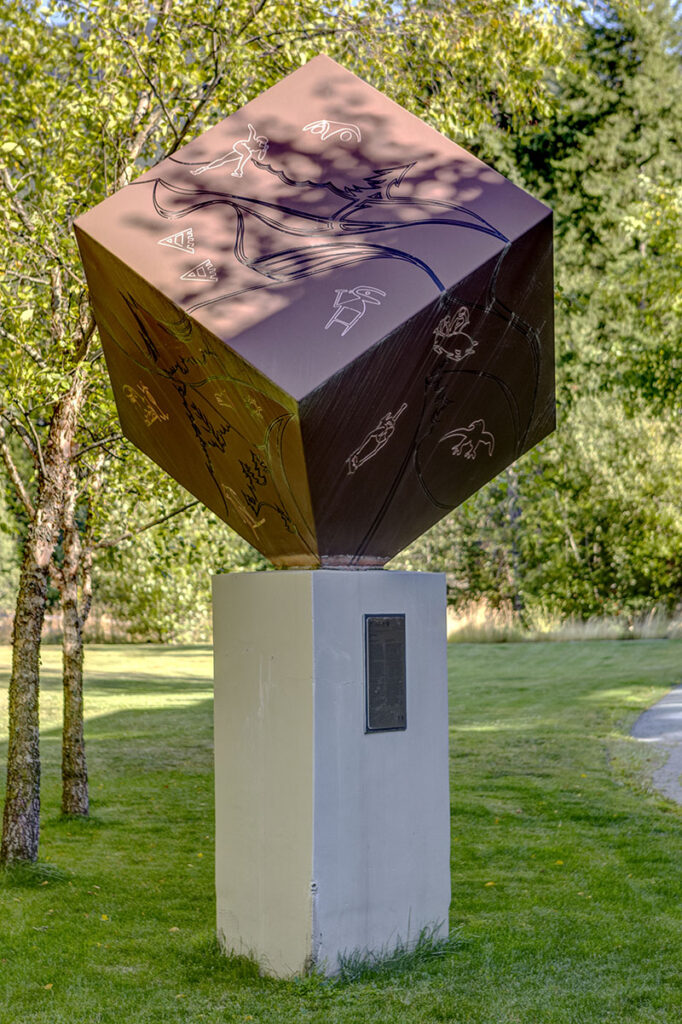 From Time Out Of Mind

Many of the pieces are within walking distance of the centre, but a number are just a short drive away — in Meadow Park or Cheakamus Crossing, for example. Visitors can also access the works outside the Village via the Valley Trail.

The SLCC “Welcome Figures” were carved by Squamish artist Sesiyam Ray Natraoro, whose work is also featured elsewhere on the tour, and by Lil’wat carvers Johnnie Abraham and Jonathan Joe.

While carved cedar poles are featured along the self-guided tour, many of the artists have used other media. Next to Maury Young Arts Centre, for instance, the round, individual faces of “A Timeless Circle,” by Musqueam artist Susan Point, were initially carved from cedar but then cast in bronze, making for a fun and interactive experience for guests. Selfie, anyone?

Across the street, the large columnar aluminum sculpture “He-yay meymuy (Big Flood)” graces the atmospheric main entrance to the Audain Art Museum. The piece, created by Squamish Nation artist Xwalacktun Rick Harry, depicts the Great Flood when, according to legend, Squamish people took refuge on Mount Garibaldi (Nck’kay) while waiting for the floodwaters to subside.

“Xwalacktun is an artist who proudly celebrates his Squamish and Kwakwak’wakw ancestry through a variety of mediums, discussing the use of traditional forms in contemporary spaces,” Dr. Curtis Collins, the Audain’s director and chief curator, said during a recent online museum discussion forum.

In the Upper Village is Squamish artist Sinákim Jody Broomfield’s creation titled “Thunderbird,” a cast-iron piece that brings to life the Squamish legend of the mighty thunderbird having made its perch on nearby Black Tusk mountain. Astute viewers will notice that the thunderbird’s beak points the way back toward the SLCC.

Cheakamus Crossing, a short drive south of the Village, served as the Whistler Athletes’ Village during the 2010 Winter Olympics and Paralympics. It’s also home to four fascinating works of First Nations art. As you’re driving into the neighbourhood, look to the left just after you cross the Cheakamus River to see “Running With Spirit,” a cedar carved piece by the team mentioned above of Abraham and Joe. It depicts a runner below a First Nations symbol of strength (the grizzly bear), representing the athletes of the 2010 Games.


Visit the nearby Whistler Athletes’ Centre to view two unique pieces by Kwagiulth artist Carey Newman. “Dancing Wind,” built into the building, represents the four wind directions, each including an animal (wolf, eagle, frog and bear) and a colour related to the Indigenous medicine wheel. Turn around to find Newman’s “From Time Out Of Mind,” a cube that includes traditional Lil’wat pictograms and modern symbols of Games competitors, created in the style of the ancient pictograms. 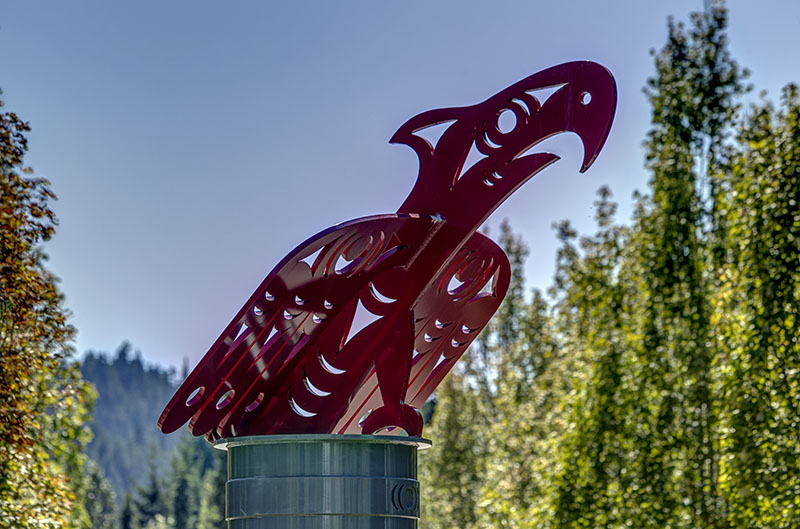 Also near the Athletes’ Centre is “Truce Wall,” created by Kwakwaka’wakw/Tlingit artists Corrine Hunt, Leo Obstbaum and James Lee in the style of the gold, silver and bronze medals handed out to the athletes during the Games. Hunt co-created the design for the medals themselves. The piece is a symbol of the athletes’ commitment to peace and the ideals of the Olympic movement that date back to ancient Greece. 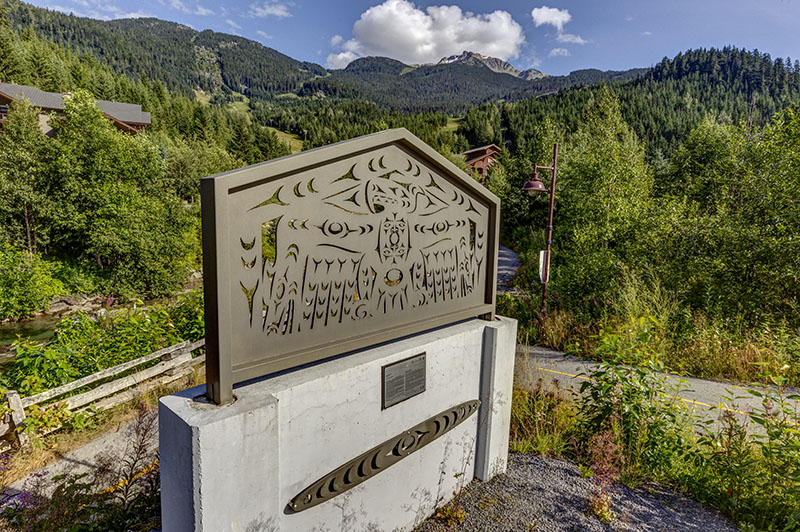