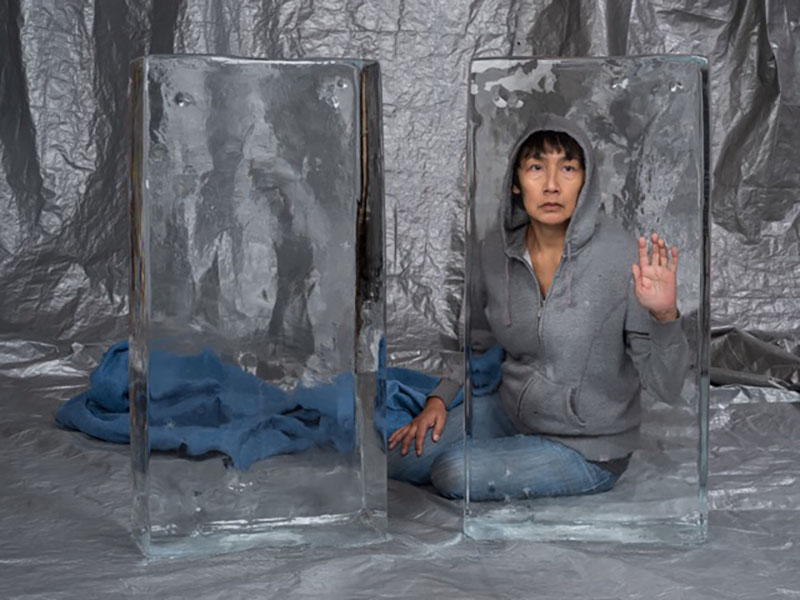 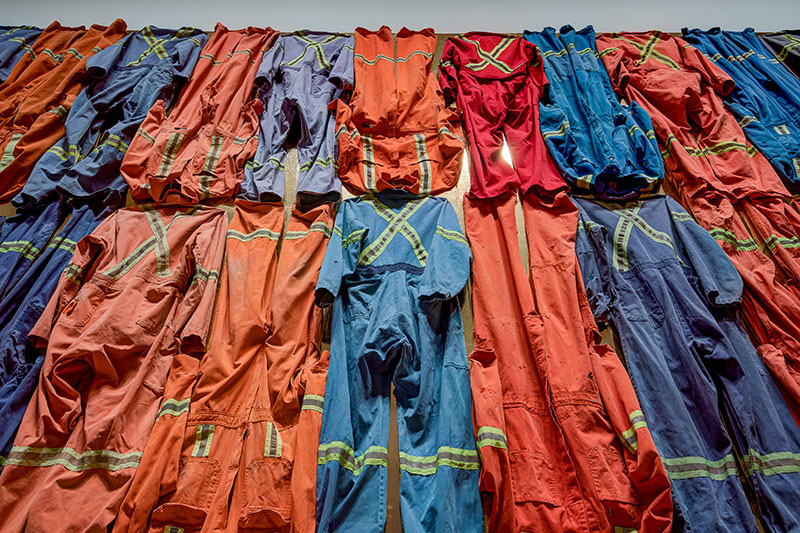 Asilvery leviathan rises from the depths of the ocean. Behind a block of crystal-clear ice, a woman reaches out, her fingertips brushing the surface. A figure wearing orange coveralls stands knee-deep in still water. A woman and a man are hunted through a forest in deep snow; a shot rings out. The images and sounds are haunting and inspire reflection in this time of communal pause.

RESERVOIR is a special exhibition by internationally renowned, multidisciplinary artist Rebecca Belmore, featured at the Audain Art Museum (AAM) until May 2021. Belmore is an activist-artist from the Lac Seul First Nation (Anishinaabe) in northwestern Ontario. Her work explores the intersections between the land, water, bodies and the socio-political concerns of Indigenous communities.

The name RESERVOIR conjures multiple meanings: a chamber for holding liquid; a large supply, a reserve; a place where water is collected and stored, particularly as a resource for power, irrigation, or a community. Belmore’s works of art — whether film, photography, projections, performance art or sculpture — are layered with meaning. The exhibition touches on themes of the vital resources of land, minerals and water; the disparity between the workers who extract precious resources and those who reap the profits; and the legacy of colonialism and environmental degradation as experienced by Indigenous peoples. 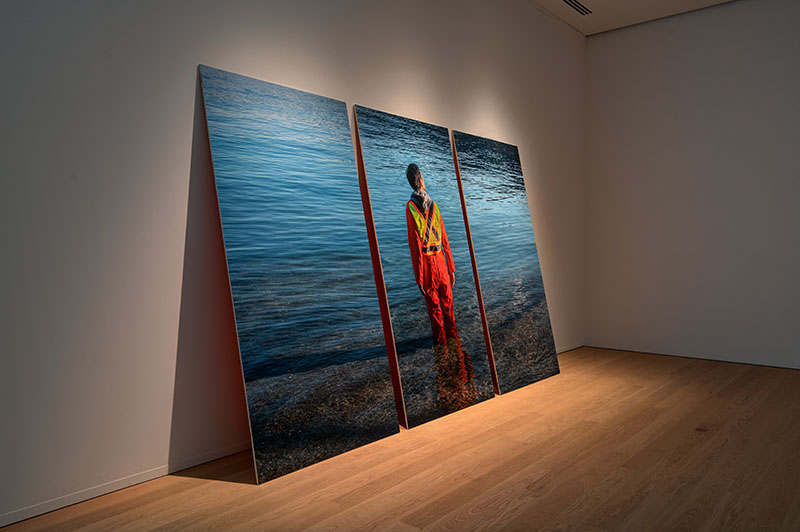 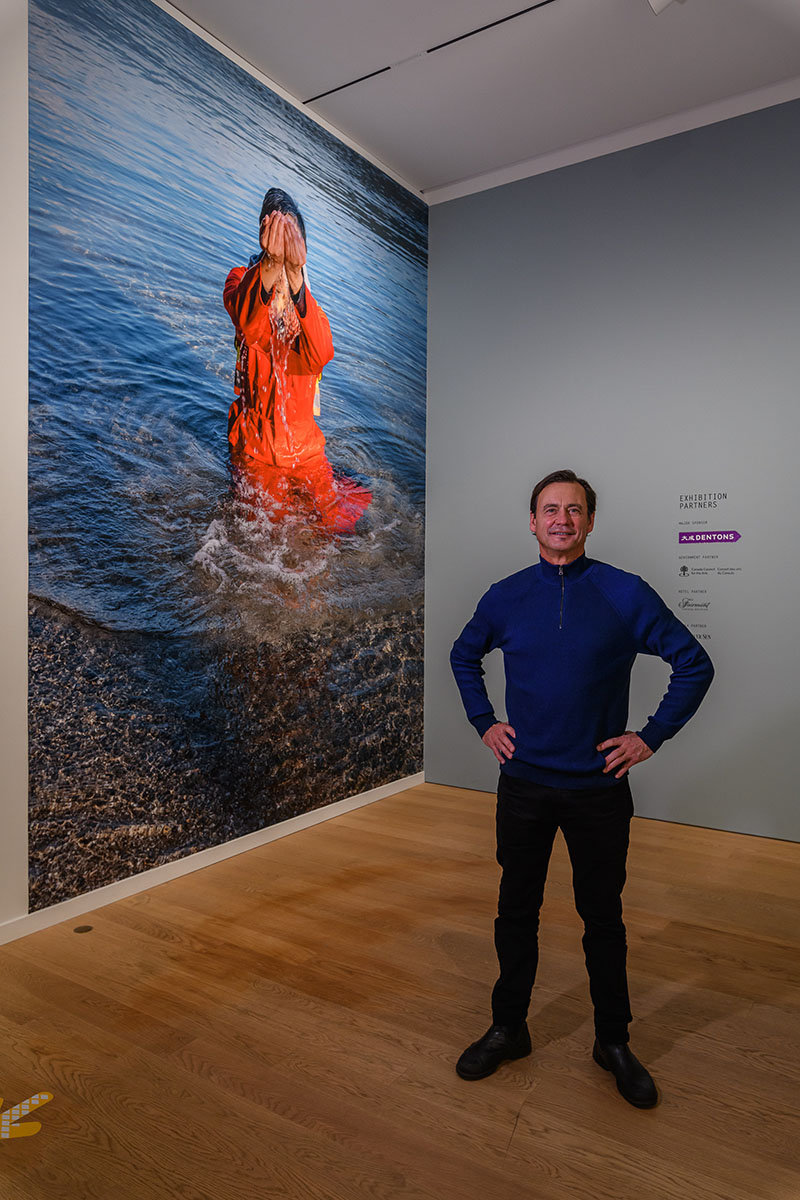 Belmore’s new artwork, “hereafter,” a three-panel photograph, shows a person wearing the ubiquitous orange coveralls of the resource worker, with a prominent reflective X crossing their back. “The coveralls are a common denominator through the entire show,” said Dr. Curtis Collins, AAM’s director and chief curator. “And they underline Rebecca’s role as an art-activist. She takes a very workperson-like approach to what she’s doing. In many of the social issues that she’s examining, she identifies herself with the working class.”

The installation “Force of Labour” comprises dozens of well-worn blue-and-orange coveralls mounted on a gold vinyl backdrop. “The shimmering gold vinyl is symbolic of wealth, and the wealth that the working class never achieves — but has a direct role in producing — the wealth of, we could say, the upper or ruling classes,” added Collins. The “X” symbol is one that makes a recurring appearance in Belmore’s work, and she notes that her ancestors would have signed treaties with an X.

In one exhibition room is a series of projected stills of Belmore in the original presentation of her performance art pieces. In another collection of photographs, Belmore has staged a re-creation of these performances with her sister Florene, who stands in. The photo “witness” depicts a woman in violent grief, tearing at her ragged red dress, which is nailed to a telephone pole. The original performance was photographed in the Downtown Eastside of Vancouver and took place shortly after Robert Pickton was charged for the murder of many women who lived there. The names of the murdered and missing women are written on the subject’s arms, and, in the live performance, Belmore raised her arm, read each name, and then screamed into the space of the street.

The photograph “mother” shows a woman wearing a grey hoodie, sitting behind two blocks of clear ice. She represents the mother of Neil Stonechild, a Saulteaux First Nations teenager who was dropped off and abandoned in a field by police on the outskirts of Saskatoon. Overnight, temperatures dropped to -28C. Stonechild froze to death, and the tragedy is reflected through a mother’s anguish over her loss. 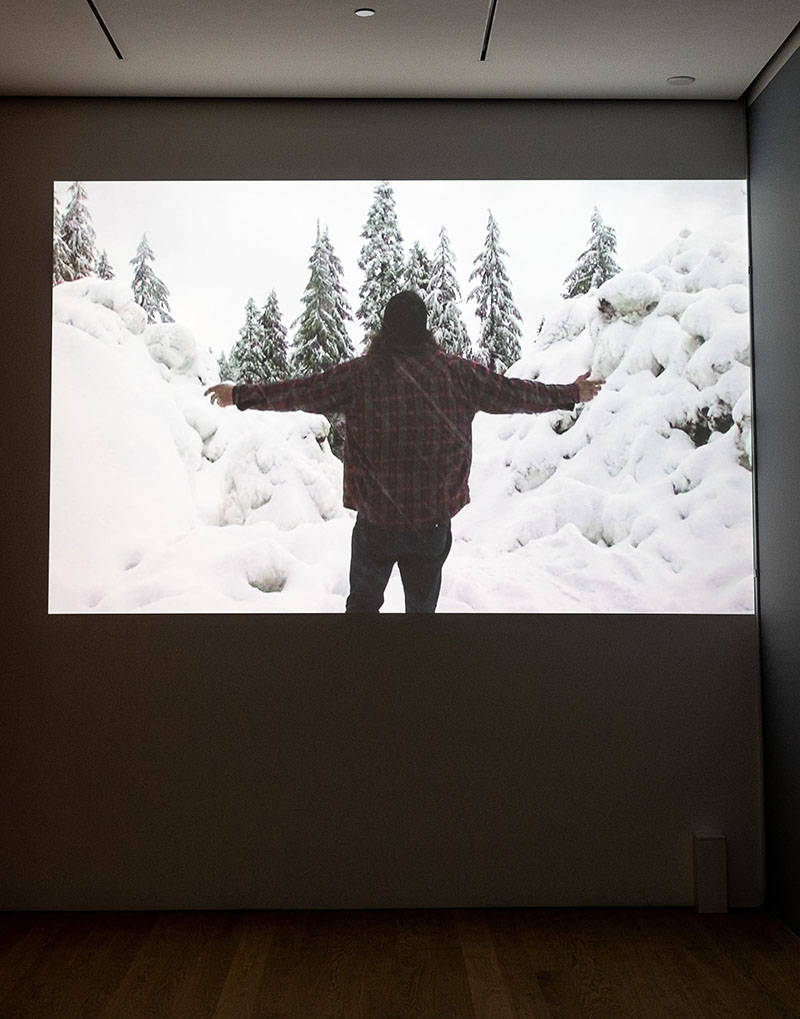 Every aspect of the exhibition has been carefully curated. As one moves from one gallery to the next, the lighting dims until you reach the largest of the three special exhibition galleries. Entering the room is like being transformed into a sea dweller and witnessing the rise of a massive marine mammal. “Body of Water” is a cast aluminum sculpture, and although the creation weighs an astounding 1,315 kilograms (2,900 pounds), there is a lightness and lifelike energy to the artwork. It appears to float, weightless, its folds of skin or jellyfish veils rippling in the deep.

And yet, the origin story of the sculpture is steeped in heaviness. Commissioned by the 16th Istanbul Biennial, the theme invokes the “seventh continent,” a plastic island of 1.8 trillion items of garbage in the Pacific Ocean that kills countless marine animals every year. Belmore was taken by the theme, and the idea came as a flash from seeing an overturned, tarp-covered canoe in a neighbour’s backyard. “And as I was looking out the window, you know, in my own apartment in Vancouver, looking down at this canoe that reminded me of a marine mammal, I thought of all those living creatures that live in the ocean that are, I think, being threatened today,” said Belmore. 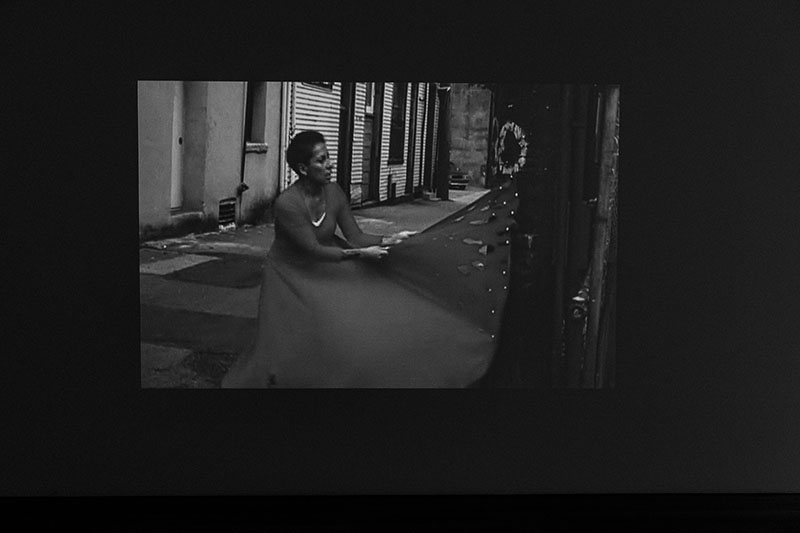 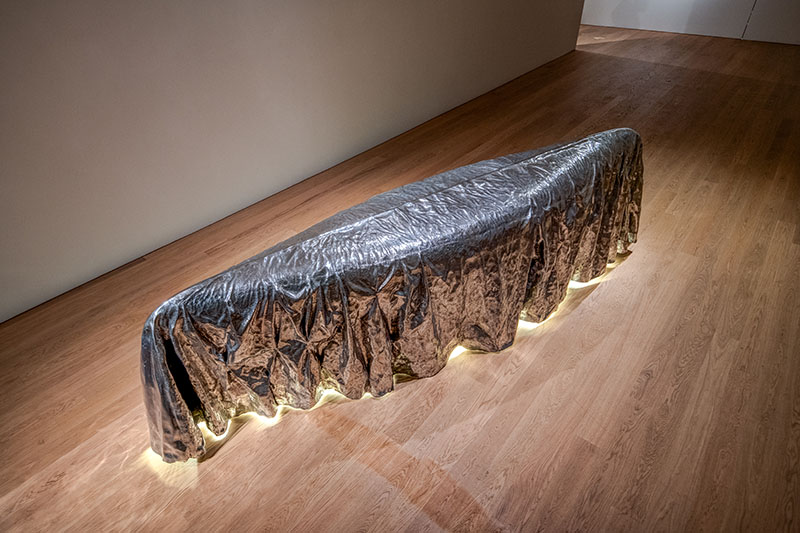 Installation shot - Body of Water, 2019 - Cast Aluminum
Commissioned by the 16th Istanbul Biennial
Produced with support from the Canada Council for the Arts - Courtesy of the Artist 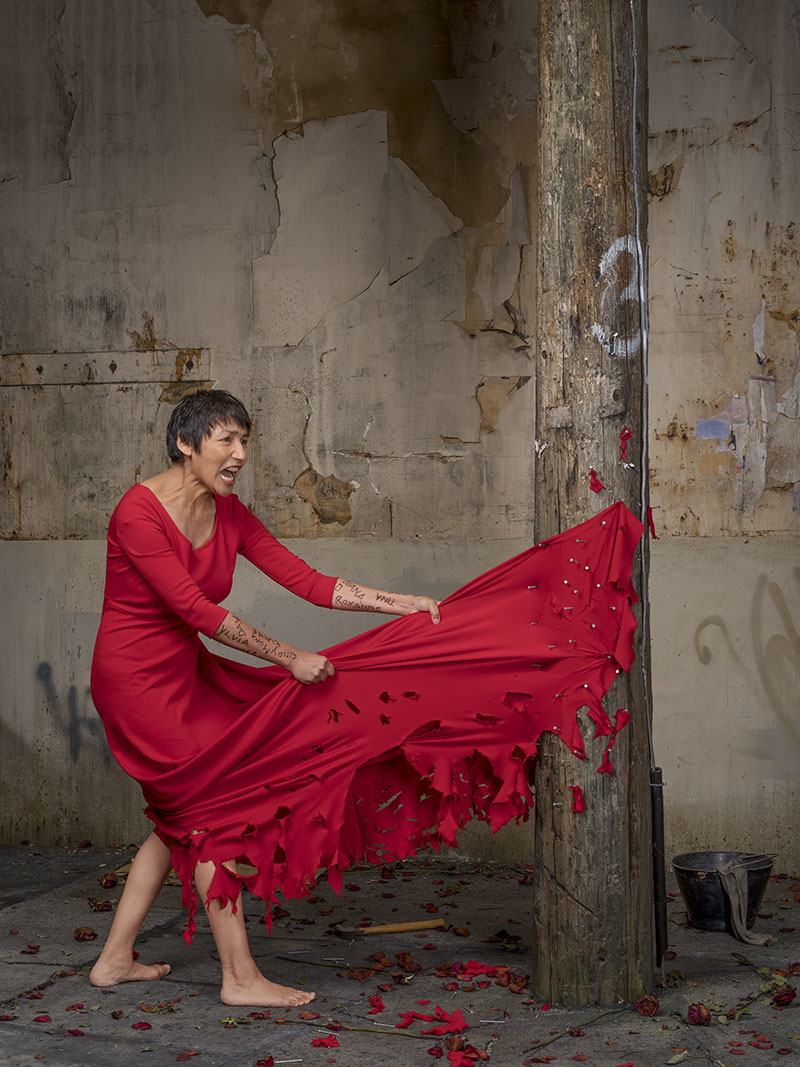 RESERVOIR is best viewed through a contemplative, reflective lens. Take the time to scan the QR codes on the wall plaques to hear Belmore and Collins in conversation about each artwork. And before your visit, you can also watch a fascinating and intimate AAM Tuesday Night Talk to hear Belmore describe the origins of the collection. Visit audainartmuseum.com/tnt. The special publication Wordless: The Performance Art of Rebecca Belmore accompanies the exhibition and is available for purchase in the Audain Art Museum’s gift shop or online.

This exhibition also has a series of connections to the Audain Art Museum’s permanent collection, an essential part of which features historical and contemporary First Nations art from British Columbia, including one of the world’s finest collections of Northwest Coast First Nations masks. Additionally, photo-based art is one of the pillars of the permanent collection, which draws a relationship between Belmore’s work and that of internationally renowned British Columbia artists Dana Claxton, Stan Douglas, Jeff Wall and Rodney Graham.