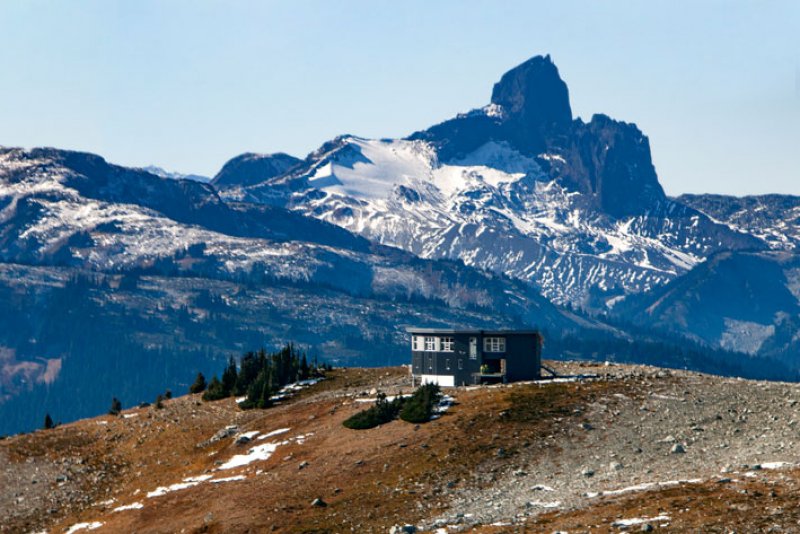 Giving you the inside information on what’s happening, what’s fun and what’s new in Whistler. Find out more about the Spearhead Huts Project and recent opening of the Kees and Claire Hut; learn about our featured local animal, the bobcat; meet the "ambassadors" of the Squamish Lil'Wat Cultural Centre (SLCC) through their exhibit featuring photos and artifacts created by the staff, on display until March 2020; plus reminisce about the 2010 Winter Olympic Games and celebrate the 10-year anniversary with Whistlerites from Feb. 12 to March 21, 2020.

One of the most common comments from visitors to Whistler’s Squamish Lil’wat Cultural Centre (SLCC) is that guests enjoyed connecting with the hard-working Indigenous staff, whose job is to share their passion for the vibrant cultures of the coastal Squamish (Sḵwx̱wú7mesh) and interior Lil’wat (Lil’wat7ul) peoples who have called this region home for thousands of years.

The spirit of sharing — involving both the passing on of the nations’ traditional practices from elders to youth and the staff’s interactions with guests — helped inspire “Ambassadors,” an exhibit that includes photos and artifacts created by some of the 50-or-so staff who work at the centre, says Mandy Rousseau, SLCC manager of marketing and communications.

“The exhibit is a snapshot of our team who has been working at the centre over the past season,” Rousseau said. “We spoke to the staff before we began this project … and we found there’s a strong feeling of home that’s shared by those who come to work here.”

Most SLCC staff members come from one of the two nations who have been living peacefully alongside one another for centuries, regularly coming to the Whistler Valley to pick berries, hunt and experience “vision quests.” Squamish and Lil’wat elders, who are experts in the creation of cultural artifacts including regalia (ceremonial clothing), wool and cedar bark weaving, regularly share their knowledge with their younger counterparts, including participants in the Indigenous Youth Ambassador program, Rousseau said. 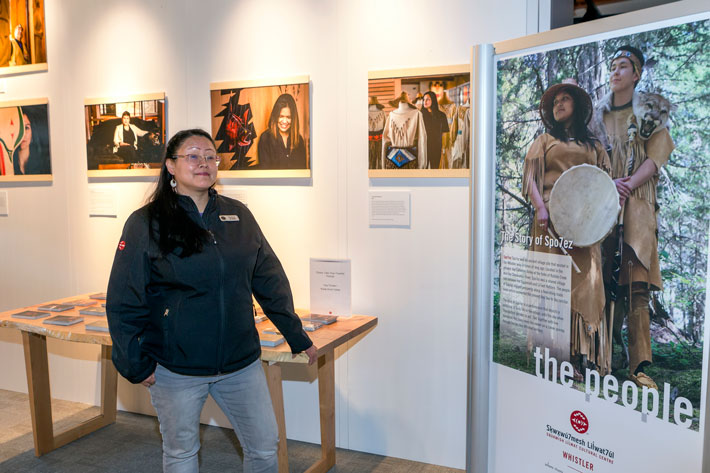 The exhibit’s images, shot by local photographer Logan Swayze, are complemented by regalia, wool and inner cedar bark pieces created by staff members after the elders shared their knowledge.  Some staff members have even become apprentices in their chosen crafts, running workshops for the centre’s guests.

The “Ambassador” exhibit runs at the centre until March 2020. For information, visit slcc.ca.

Like all felines, bobcats are stealthy animals who tend to shy away from humans while quietly stalking their prey; but they take up a lot of screen time on Michael Allen’s remote wildlife tracking camera footage. Allen, who has been involved in wildlife (especially bear) research in the Sea to Sky Corridor for more than two decades, says bobcats seem to be attracted to the same areas as black and grizzly bears, and they’re not at all camera-shy.

“Being a cat, they’re pretty secretive, but when I started using remote cameras to get footage of bears, I started to see bobcat after bobcat,” said Allen.

About 2 ½ times the size of a house cat, bobcats are often mistaken for lynx. In fact, the two are in the same family — the bobcat is one of the world’s four major species of lynx. But the Canadian lynx has broader feet and longer legs than the bobcat, allowing lynx to stalk their prey (mostly snowshoe hares) in deep snow. Lynx also have long (up to two inches) black tufts at the ends of their ears, while bobcats either have short ear tufts or none and a short or “bobbed” tail.

Bobcats are more adaptable, thriving in lower-elevation forests, and are therefore more plentiful (and more often seen by humans) than lynx in the region, Allen says. Their diets are much more diverse: Allen calls the bobcat a “No. 1 scavenger” that often comes along once large carnivores such as bears, wolves and cougars have eaten most of a kill.

“The bobcat has a really small stomach. They don’t have to eat a lot at once, so they eat a lot of small rodents; and they’re not large enough to take down anything bigger,” he says. Some of Allen’s footage shows bobcats diving into streams to fish for salmon. 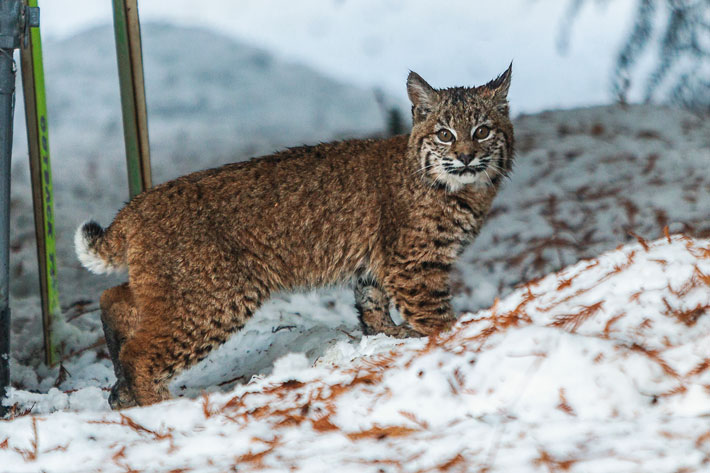 “They’ll perch on a log and just pounce on an 80-centimetre salmon, and then they’ll drag it away somewhere, eat some and bury the rest in the snow,” Allen says.

Bobcat attacks on humans are rare. If you see one, the Resort Municipality of Whistler advises people not to approach, keep pets on a leash and small children at a safe distance, keep your group together and back away slowly. Report sightings to the B.C. Conservation Officer Service at 1-877-952-7277 or 604-905-BEAR.

If you ask a long-term resident of the Sea to Sky Corridor where he or she was during the 2010 Vancouver Winter Olympics and Paralympics, you’re likely to be greeted by smiles and a wistful gaze — and if you have time, a few entertaining stories. Guests who visit Whistler, the 2010 Olympic and Paralympic “Host Mountain Resort,” in February and March 2020 will have a chance to be part of events marking the Games’ 10-year anniversary.

The organizations planning events during the anniversary period (Feb. 12 to March 21, 2020) include the Resort Municipality of Whistler (RMOW), the Whistler Museum and Archives, the Whistler Public Library and Whistler Sport Legacies, the not-for-profit group that operates venues such as the Whistler Sliding Centre and Whistler Olympic Park.

An exhibit titled “Building the Olympics” is planned at the Whistler Museum and Archives, located next to the Whistler Library on Main Street. “It will include both elements of building the physical infrastructure as well as building the community spirit around it,” says Museum Curator Brad Nichols. 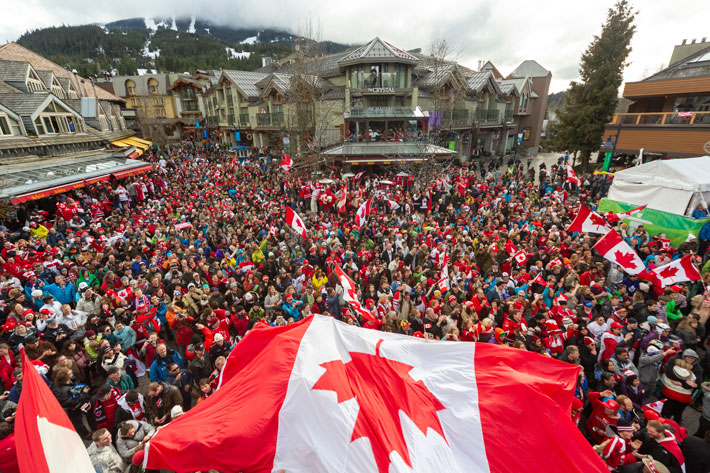 Whistler Sport Legacies officials will be coordinating Whistler events with activities taking place in Vancouver. RMOW officials are planning to release details of the 10th-anniversary commemorations in January. For up-to-date information visit whistler.ca/2010Games.

As ski touring gains popularity in North America, there is a rising demand for more backcountry huts to provide shelter for the night or a warm place to rest. Thanks to a group of dedicated supporters, the Spearhead Huts Project is well underway on the Spearhead Traverse, a popular backcountry skiing and hiking route in Garibaldi Provincial Park near Whistler. The first of three planned huts will be open this winter.

Located at Russet Lake, the Kees and Claire Hut has 38 bunks in six different sleeping areas. The hut offers propane cooktops with basic equipment for cooking and dining, propane heaters, LED lighting, three toilets, wastewater disposal, and 12 USB ports for recharging mobile GPS units. A water system is planned but won’t be in operation this season, so water can be collected from Russet Lake or by melting snow.

The hut is open to the public, but there is a fee to stay there: adults are $45 per night, and children under 14 are $30. For more information or to make a reservation, visit spearheadhuts.org. 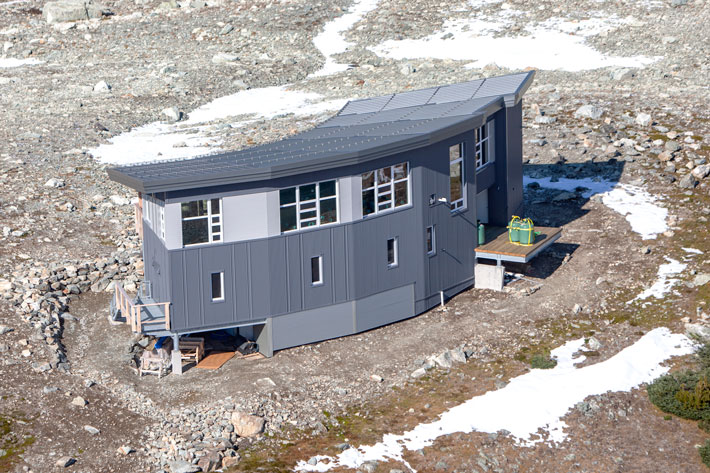