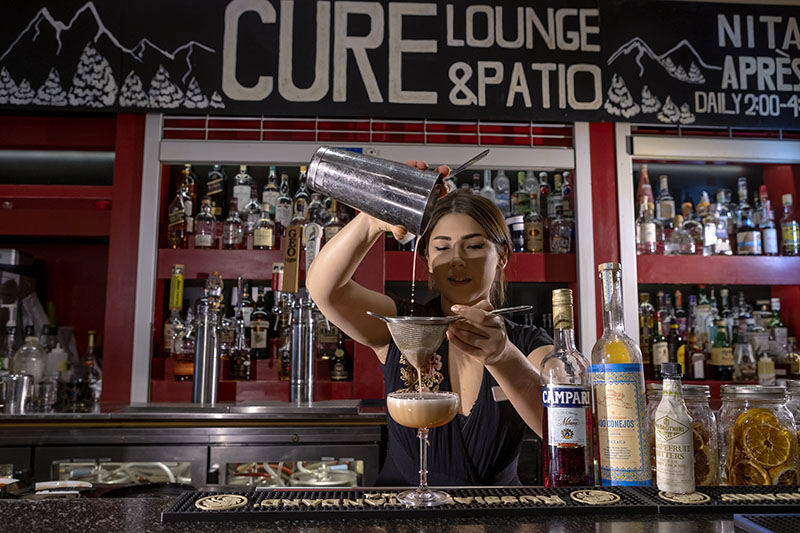 Cocktails with a Conscience

Nothing pairs better with a delicious craft cocktail than knowing you’re taking steps to help protect the earth, and yes – even baby steps count! Check out these five Whistler bars who are doing all they can to stay sustainable, from reducing food waste and sourcing local ingredients to working with brands with impeccable eco-credentials. It’s time to start drinking thoughtfully with the health of the planet as your first priority. Step one? Stop asking for straws! Step two? Keep reading… 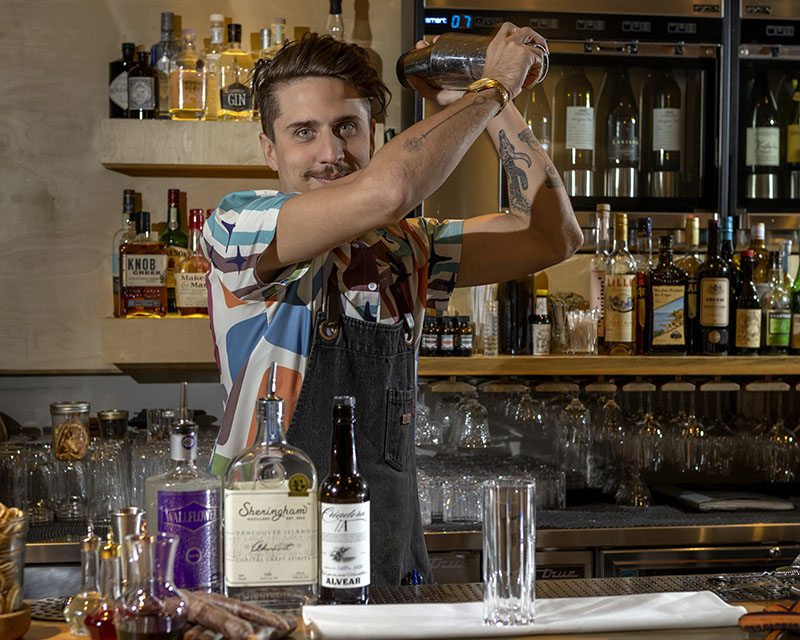 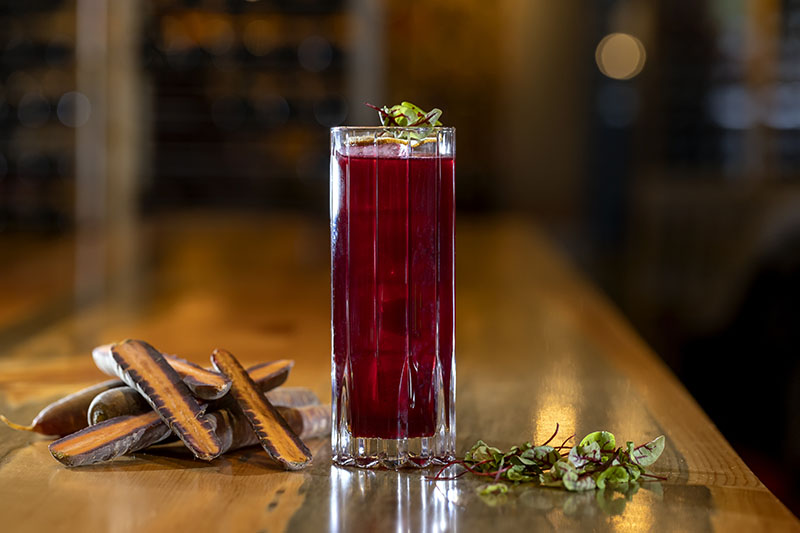 
From the lovingly preserved produce that decorates the dining room to the sustainability statement in the washrooms, Alta Bistro puts its zero-waste credentials front and centre, and Bartender Tommy Britnell is proud of it. “We love to talk to our guests about how we use circular sustainability; we show them how we turn one thing into three — two of which might have been thrown away. You never want to preach, just show by example and encourage positive change.” Encouraged by their chef, Nick Cassettari (“he loves to play and work out new ways to go further with recycling and reusing produce”), Alta Bistro’s bar team works closely with the kitchen to help take those extra sustainable steps.

“Our process is we look at what’s coming in, so we think seasonally and what we might have in abundance,” explains Britnell. “Is there anything we can forage, like mushrooms or berries? Maybe a farmer has a glut of ‘ugly’ carrots, and we can find ways to use them.” And that’s exactly where today’s drink began: with an excess of purple carrots. The bar team juiced them and made a sweet, savoury, deep purple syrup. It’s shaken over ice with Vancouver Island’s Sheringham Distillery’s aquavit, Odd Wallflower gin, Ampersand Distillery Green Walnut Nocino, and citric acid (no citrus used here to reduce reliance on high-carbon-footprint lemons and limes). This carroway-cardamom-carrot extravaganza tastes even better than it looks — and it looks like a million dollars!

“Super tasty. Super simple!” Britnell declares. “It’s all about what can we do to use things to their best now and what can we preserve for the colder months. We love to squirrel flavours like this away in preserved shrubs and syrups to bring a taste of spring or summer in[to] the heart of winter.” 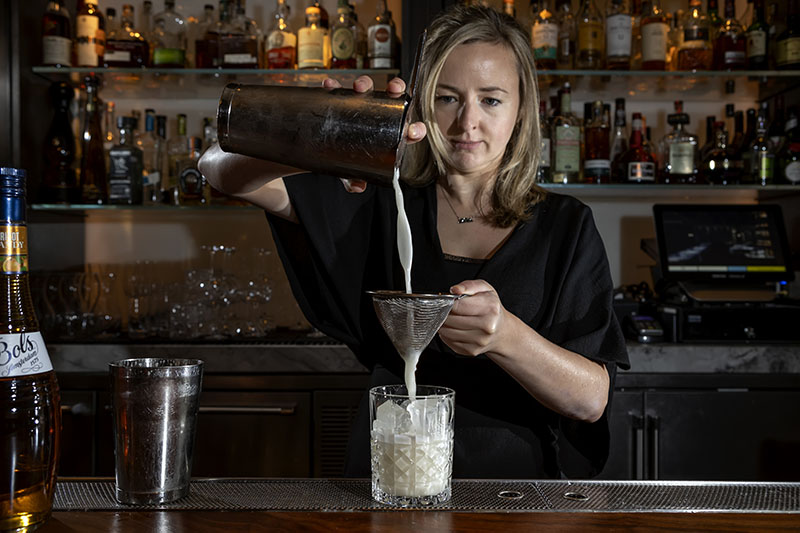 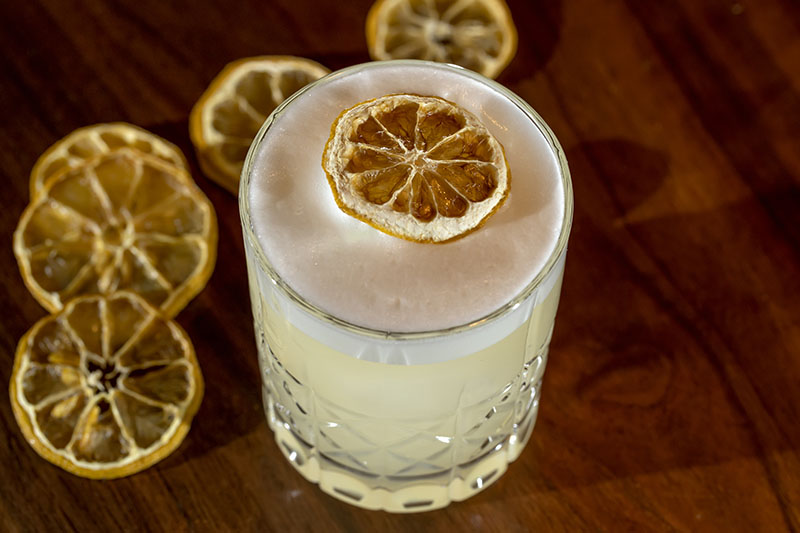 
There are new beginnings in this glass from Il Caminetto — and fresh starts behind the bar with their new bar manager, Milan Katrenic, formerly of Araxi, who’s returned to Whistler after a stint back in Europe. He brings a wealth of experience from some of its best-known bars, including Barcelona’s Paradiso, named Best Bar in the World this year by the prestigious U.K. media company William Reed, in its “World’s 50 Best Bars.” “I’m super excited to be back, and I’m really happy to be back in this role,” he shares. “We’ll be making some changes in the winter menu, and by summer, it will be where we want with a big relaunch of the cocktail menu.”

On the menu, for sure, the focus is on creating as little waste as possible. “I want to work with the kitchen wherever we can to upcycle and recycle ingredients,” Katrenic says. “Right now, each morning, the pastry department vacuum packs any egg whites they don’t use, so we can use them for sours later, [so that] they still stay fresh. Lemons and limes get used for zesting all the time, so we take those fruits that would otherwise be thrown away and make fresh juice; whatever doesn’t get juiced gets dehydrated for garnishes. Sure, in the grand scheme of things, something like this might not seem like a lot, but it [all] adds up.”

This cocktail brings many of those re-purposed elements into play — a twist on a toreador margarita; from the kitchen comes lemon juice, a dehydrated garnish, and egg white, then Reposado tequila from a sustainable producer (“it may come from Mexico but they’re playing their part and we want to support that”), agave and a little apricot liqueur. Fresh, creamy and dangerously drinkable, it’s like a drop of liquid sunshine. “It’s so good for a cold winter day,” Katrenic says. “Fruity, subtle notes, and lots of flavour. I love it.” 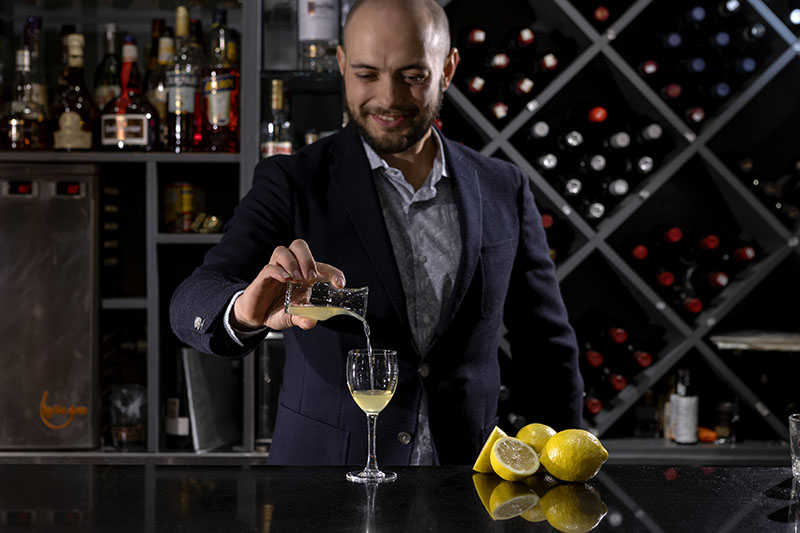 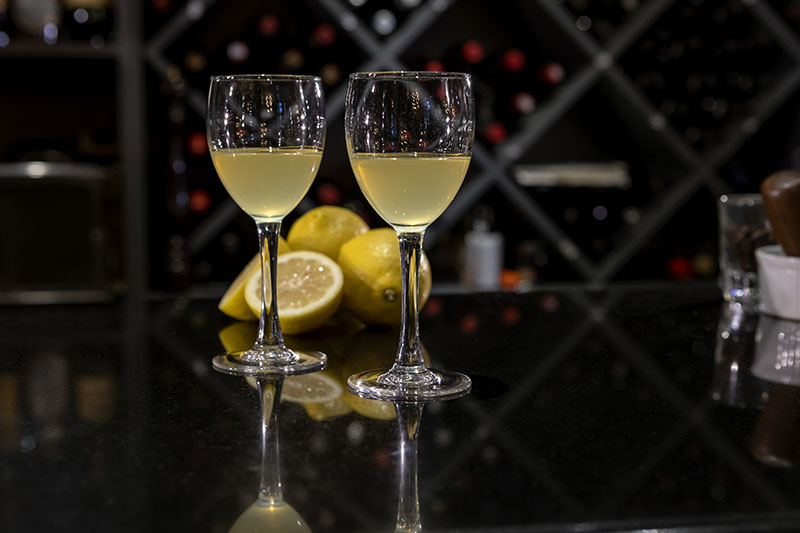 
“I think you should try the commercially made one to taste the difference.” Mike Sedlacek, Quattro’s bar manager, grins as he pours me a small taste of Limoncello to try alongside his house-made version. I know this brand; I’ve had it before and always thought it was delicious… until now. Compared to Sedlacek’s… this one sip tastes how dish soap smells. I’m stunned. Blah! What began as part of a team effort to be more sustainable has made the most delicious aperitif I’ve ever tasted! And he often uses it as a base for his seasonal cocktail creations.

“It’s just three ingredients: grain alcohol, lemons, and simple syrup,” says Sedlacek. “I peel the lemons and soak the peel in the alcohol for three weeks. Then I take the peel out and add simple syrup. That’s it! But the kitchen uses my lemons for juice, and then they take the peels, dehydrate them, and use them as a dessert garnish, or sometimes they rehydrate them as a Limoncello gel. [It’s] really is a zero-waste liqueur!”

The bar team at Quattro has been working hard to become more sustainable, from eliminating plastic straws and not using cocktail napkins to minimizing their carbon footprint in stocking the bar shelves. “We try to use local spirits as [much] as we can; we’re really concentrating on producers from Vancouver Island and the Lower Mainland,” explains Sedlacek. “I’m always looking to work with companies with a smaller production and thoughtful sustainability principles.” Sedlacek proudly shares that Quattro now even has its own floral, mountain-style gin made in small batches with a local Whistler spirit company, Montis Distilling, for the ultimate in locavore booze.

“Encouraging sustainability can be tough,” muses Sedlacek. “We know there’s lots of international travel, but by taking small steps, we’re making progress; it might be slow, but we’re getting there.” So I’ll raise my glass of this delicious house-made Limoncello to that — perfect as a digestif or aperitif, it’s soft, fragrant, lemony, and exactly the right hit of sweetness. Look for this liqueur as a star ingredient in a refreshing, zingy cocktail next spring and summer. 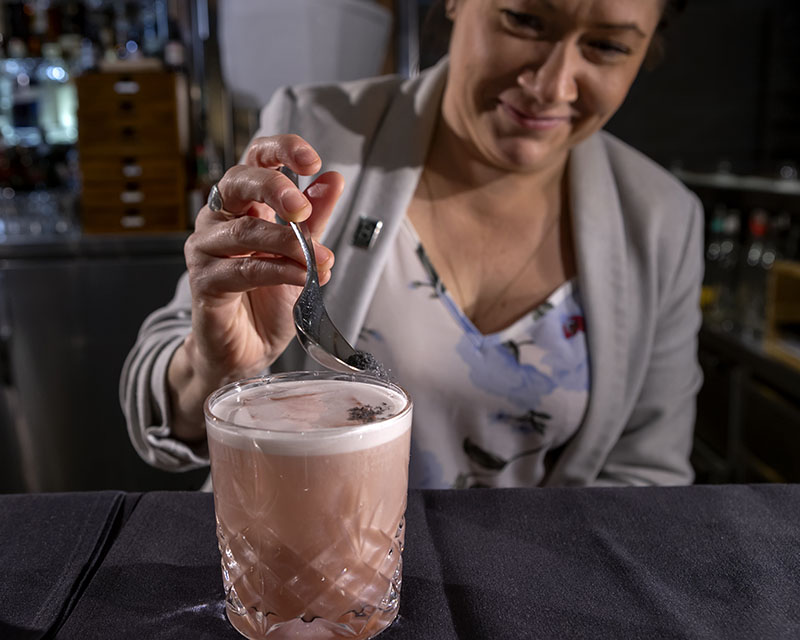 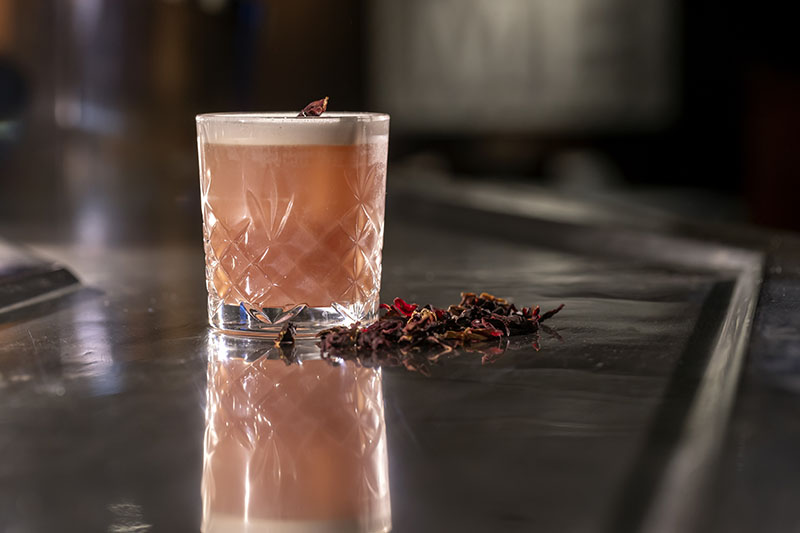 
Jessica Gray is puzzling about how to keep glass straws clean. “It’s a challenge,” she tells me. “We don’t offer our guests straws now; it’s all just by request. We’ve replaced all our bamboo skewers with metal ones too. Sustainability is always at the back of our minds.” Gray deftly measures out Wayward Distillery’s Drunken Hive Rum for a Cheshire Cat cocktail and tells me, “We love working with local B.C. suppliers like Wayward. It keeps our carbon footprint low, and these guys make their spirits from honey, which supports the bees who keep everything alive, which is exactly what we all need!”

In the shaker goes rum, lemon juice, egg white, hibiscus tea (“we make it ourselves from hibiscus flowers”), and a pinch of black lava salt to add a savoury note. The lemon and egg whites come from the kitchen. Gray explains, “We work with our kitchen team as much as possible to make sure ingredients aren’t thrown away, and our production and waste are as efficient as possible.” Along with re-purposing egg whites and juices, the Bearfoot bar team tries to go the extra step by using as many parts of each ingredient as possible to make infusions and syrups. “Say we made a raspberry syrup,” says Gray. “We dehydrate the pulp, then turn that into a powder, which we can use in a future drink, or the kitchen can use on a dessert.”

A riff on a rum sour, this may be called the Cheshire Cat, but it’s an absolute Goldilocks of a cocktail: not too sweet, not too boozy, it’s creamy, delicious, and just right. Gray says with a nod, “It’s definitely got that solid sweet-sour thing going on; earthiness from the hibiscus and then the sweet warmth from the rum, and that little pinch of salt brings it all together.” 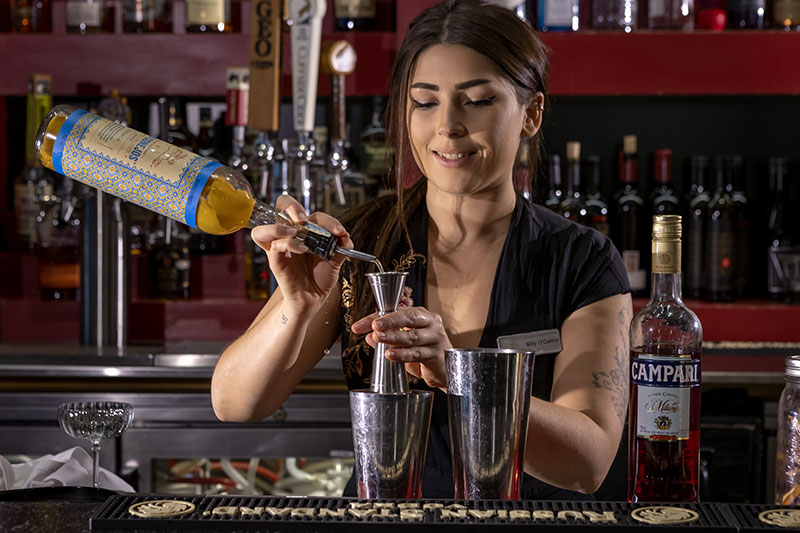 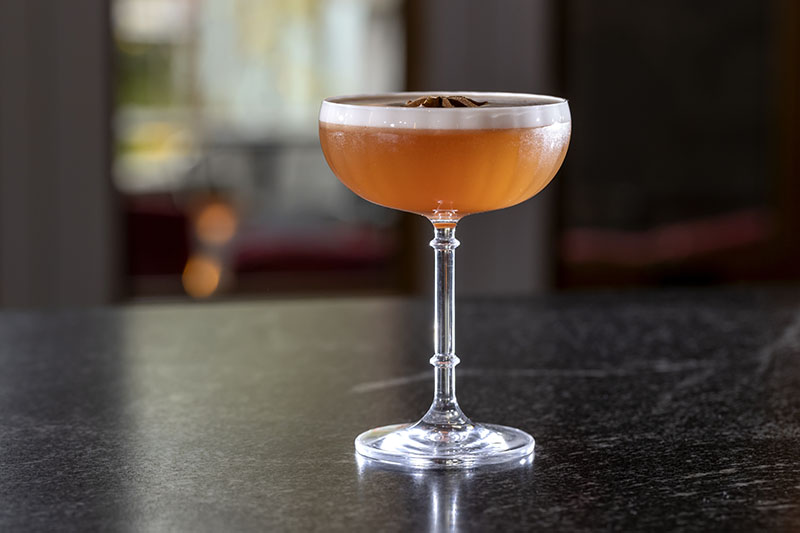 
“We take a lot of pride in our composting. We’re really big on that,” Milly O’Connor, Nita’s food and beverage manager, tells me. “When we’re juicing or making syrups and tinctures, whatever we can’t dehydrate, we want to put any waste back into the ground.” Thoughtful sustainability, such as only offering paper-based straws by request — and plenty of communication between teams — lies at the heart of the culinary and bar programs at Nita Lake Lodge with its three locations: the Fix Café, Lakeside Restaurant and Cure Lounge & Patio. “We have to work in tandem with the kitchen to make good choices,” says O’Connor. “I’ve been working here for a year now, and it’s been awesome; I’ve learned so much!”

Today O’Connor is making me a grapefruit-infused mezcal cocktail (“almost an elevated negroni”) that starts with the peel. “We juice around 50 pounds of fresh fruit every day, so we make sure to use the peels wherever we can.” The grapefruit peel is boiled first to reduce bitterness, then used to infuse the mezcal with citrus notes. Next, Campari, a splash of grapefruit juice, a savoury star anise sugar syrup, and grapefruit bitters to sweeten the deal are shaken first with an egg white (“from the kitchen, as they just use the yolks for hollandaise sauce for breakfast and brunch!”), and then over ice.

The result? A picture-perfect foamy cocktail that smells innocently fruity but carries a pleasingly boozy punch! The star anise syrup brings sophisticated savoury notes that pair perfectly with the smokiness of the mezcal. “It’s a good journey through the drink,” O’Connor says. “Smokiness on the nose, then you taste grapefruit, and then finishes with that star anise. It’s an approachable drink for anyone who’s new to mezcal, for sure.”